This winter there will be 100ft snowdrifts, it will be so cold the flames on your  fires will freeze and Polar Bears will emigrate south; ripping everyone’s heads off! Sorry…. I slipped into ‘Daily Express’ mode. I really do think that someone needs to tell the editor of the ‘Daily Express’ that, what he saw on telly the other day was a film called ‘The Day After Tomorrow’ and not this winters weather forecast!

It certainly has been a strange year for weather but at least it hasn’t been as wet as 2012 well, our garden didn’t flood like it did last year……

As for the summer, not as wet as the previous year but nothing to right home about, that’s why I haven’t included any photos; plus I have missed part of the summer anyway.

In last years blog about the weather, I had found several predictions (no, not from the ‘Daily Express’) that was predicting a hot dry latter part of the summer… oops!

The autumn has not been that great either, we have had some wonderful late autumnal colour though…..

Last one from the Botanics

Now what about the rest of this year and into 2014. There are already many predictions out there, the best ones being in the Daily Express, the internet obviously is the largest source of information. This time though, instead of quoting predictions from the internet, I’m going to give it a crack myself. So this time next year when I do a prediction for 2015, you will be able to see how far out I was.

A white Christmas is what I would really like to see but as usual, this will not happen. A cold raw lead up to Christmas with a little snow in places, with the threat of more heavier snow straight after the holidays, nothing like what certain papers are saying but hopefully a little more than usual. This one I’d  love to be wrong on and would like to see snow from mid December through to January.

As some of you will know, is that us gardeners don’t really give a monkeys about the winter weather as we all go into hibernation…. handing over to those elves 😉

For the spring prediction, I’ll hand over to the Groundhog. Hang on, we don’t have Groundhogs in this country. Oh well, I’ll leave the picture in…. as they are so cute! 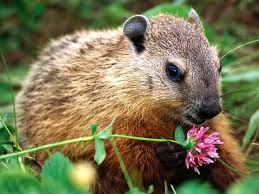 Spring 2014 will be the same as this years: cold, miserable, wet with snow at times. Warming up in May, with heavy rain in early June, just in time for the May Ball. As long as we have a window of opportunity to get on with some lawn care, I will not worry to much about the weather.

Sticking my neck out here, three months of very warm sunny weather from July – September. If nothing else we bloody deserve it. On a personal note, I don’t really care what the weather is next summer, just as long as I get to work in it this time. A season with lashings of sun is long overdue, it gives us chance to recharge those batteries, to help us through the autumn and winters.

So there you have it, another pointless weather prediction to help clutter up the internet. The weather is always a challenge for us gardeners and part of the fun of gardening, is not knowing what is round the corner, it makes all aspects of planning…. more interesting.

Whatever does happen, it will never be quite as bad to what the ‘Daily Express’ will predict.