‘Creeping Death’ or for the majority of this post a ‘Creeping pain in the arse’ with of course a few exceptions.

We all have a few of them in the garden and for some of us unlucky ones, we may have all of the following. Whether it is a weed a disease or a creeping little pest attacking our garden, some of them are more obvious than others but some will creep up on you and before you know it; you have a major problem. As with a lot of problems in the garden, some actually look quite attractive as does the first one on the list……

Creeping buttercup a tough but pretty looking little bugger that can be found in all areas of the garden. Does very well in moist soil and is often an indication of poor soil structure and drainage. It has strong deep penetrating white roots but beautiful yellow flowers from May till the autumn. In the borders it can be dug out and if hoed regularly, it will sulk and finally give up the ghost. In the lawns, I find that regular close mowing does the trick.
There are chemical ways to control this weed and with all the others in the post. I’m not saying this is a green post as sometimes you have know option but to use chemicals, it’s just that sometimes the answer is already in the garden or the way you manage the problem. Remember, prevention is always better than cure and often a lot cheaper.

Don’t we just love this little beauty. Every Gardeners nightmare found in nearly every garden, with rumours it’s even been found on the moon. White fleshy roots that can grow fifteen feet or more and stems that wrap around everything it touches, it does have beautiful white trumpet shape flowers though. Digging is the best thing for controlling bindweed in borders, getting out every single piece of root, know matter how small. This is best done in winter when, if necessary lifting out plants and tweezing out all them white roots; unfortunately many a good plant has been thrown out trying to eliminate this thug! Probably, this a plant where chemicals have to be in the main part of the attack. Spraying the tips in the growing season and then putting it in a sandwich bag is the best way I have found. 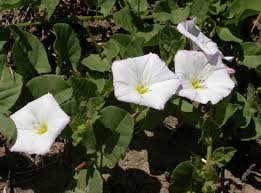 Everything is the same as above except this one is a lot smaller but still a thug! 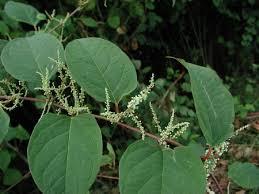 It’s a very attractive plant that can grow to over two metres in height with beautiful white flowers in late summer. The downside is, it’s a complete thug that has very deep creeping roots (rhizomes), it smothers all in its path and is a strong clump forming perennial. Introduced from Japan in the nineteenth century and from 1981has been banned from being grown in the wild.
You can try digging it out (good luck on that one) and then keep hoeing the new growth. It will be slow progress doing it this way but so is using chemicals on it; at least digging will keep you fit. If your digging it out don’t just throw it in the compost bins, it needs to be disposed of properly; allow it to dry out and have a lovely bonfire…. not forgetting the baked potatoes. 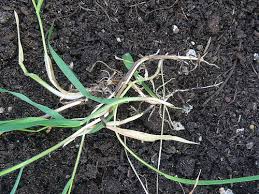 I wish the grass in our lawns grew as well as this one, it’s tough, long and very very strong. It gets absolutely everywhere in the garden: lawns, borders, paths everywhere! It has, like all the other garden thugs, strong creeping roots (rhizomes) and a persistence to test many Gardeners. Thankfully they are a reasonable shallow rooted perennial, that can be dug out from borders carefully getting out every little piece of root. If it gets it’s toes into lawns it is a different story altogether. Selective weed killers do not work and if it is really infested, spray the whole lawn with a non selective systemic weed killer and then start again. Or don’t bother with even putting a lawn back, they are a pain in the arse all on there own, you’ll have less headaches as well.

This is a true creeping death. It is the most destructive fungal disease we have in the UK. It attacks most woody perennials and nothing is truly immune to this assassin. There are several species of Armillaria and it spreads underground attacking the root system, the decaying roots have white mycelium that has a strong smell of mushrooms. Above ground you may see: dying branches or stems, bleeding or cracking at the base of stems, poor flowering or excessive flowering and in late summer early autumn the honey fungus mushroom at the base. Death comes quickly or can take years! As for chemicals, forget it as nothing works. Dig out and burn all parts of the infected plant is the only way to deal with this horrible disease. Unfortunately I come across this disease on a regular basis and have lost many a good plant in our gardens at work.

So there you have it for now anyway but there are many more little creeps we have attacking our garden, so know doubt there will be more posts on this subject in the future.

And for some of you who have read my posts before, you must of realised that I would of finished on a musical video….. especially with the title I chose!