If you go down the woods today……

Waresly and Gransden Woods is a deciduous wood that is situated in South Cambridgeshire, not to far from where I live and is managed by the ‘Wildlife Trust’.

Even though I have lived in and around this area all my life, I had never visited these woods before, not until the summer of 2013.

Ever since my childhood I have always loved going into the woods. Although most of the woods I visited in my childhood, were ones I shouldn’t have been in. I spent many happy days dodging farmers trying to get to a wood and then hiding from them when I got there. I always treated the woods with respect though, even as a child.

These woods you are allowed to visit as long as you keep to the paths and treat the area with respect. So if you do live in this part of the world, it’s a place I do recommend you visit and it has a handy car park as well.

…….Between the car park and the wood is an area called ‘Browne’s Piece’. Originally cleared for agricultural use, this area has been brought by the Wildlife Trust and is being encouraged to regenerate by natural process.

To keep myself out of any mischief, I brought along with me my youngest daughter Enya and our mad little terrier…. Trixie. Trixie is basically Enya’s shadow, they have grown up together and if given the chance, would go absolutely everywhere together.

……..It was the early part of August 2013 when we went to these woods and even though it was overcast, it didn’t seem to affect the light levels inside the woods.

Now within my family I am very famous for getting lost in woods,  Enya did remind me of this so to avoid any argument, I let Enya and Trixie lead the way. By the way, we did always keep to the path.

………The deeper we went into the woods, I was constantly stopping to take pictures, much to Enya’s annoyance.

Now that’s not Trixie’s paw print….. much too large!

I always had this feeling we were not alone in these woods. Even though we saw no one or thing but I certainly heard things in the distance and kept catching glimpse of something in the corner of my eye.

……..What seemed to be the centre of the woods, we came across a wooden bridge across at the time…. a dry ditch.

……..A couple of fallen trees, one obviously a lot more recent than the other.

…….Ah, time for a sit down. When you have a eleven year old with you and a little Terrier, this means as soon as your arse touches the bench you have to move again…. no patience.

……..Before we knew it, we had found the far edge of the wood. With more beautiful views across fields, we decided it was time to head back, letting Enya and Trixie lead the way of course….. or we would of of never found our way back.

This was one of many paths we could of taken and this year we will head back and see where the others take us.

…….There was one thing I could not shake off and that was the constant feeling that we was always being followed…. but I’m sure this was just my over active imagination! 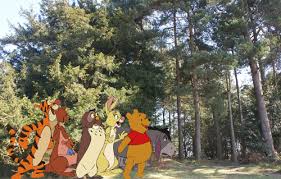