“The loneliest people are the kindest. The saddest people smile the brightest. The most damaged people are the wisest. All because they do not wish to see anyone else suffer the way they do.”

The garden can be one of the loneliest places, but sometimes…that’s just the way I like it.

The peace and tranquillity, coupled with all the sounds, smells, colours, plus all the wildlife makes it a very calming place to be. In one of my earlier posts (‘It’s a Kind of Magic’), I talked about the garden in your head, the one that holds all those wonderful memories that you can go back to; especially in times of stress. But do those memories of your past sometimes join you in the garden? Or, do the memories from that garden itself join you as well as your own?

“People do not die for us immediately, but remain bathed in a sort of aura of life which bears no relation to true immortality but through which they continue to occupy our thoughts in the same way as when they were alive. It is as though they were traveling abroad.” ~Marcel Proust

Having grown up knowing, playing and having worked at Hemingford Grey manor, and for those of you who don’t know, this is the place where the ‘Green Knowe’ children’s books were based and written by Lucy Boston. Books that were based, mainly around the house and garden, where the past inhabitants interacted with the present. 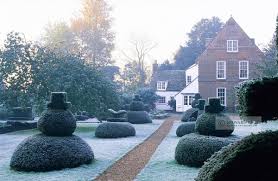 They were always happy memories from my childhood, visiting my Nan and Grandad at the manor where they worked and Mrs Boston, who always found the time to say hello. Then later in my teens, I was working there on work experience from school and then for a short time after school. These were feelings of great happiness, magical feelings and the feeling of being safe. The very same feelings I still sometimes get, especially when alone in the gardens I work at today. The safe feeling, the feeling that everything will be ok, especially when there are times of stress. Sometimes the feeling that you are not alone, although it is never a horrible feeling….but one of great comfort.

Are these just similar feelings you get when alone in the garden -as I have said before, the garden is a magical place- or do we get visited by the happy memories of our past…..I’d like to think it is both. I am not religious in any way, but personally I do believe that there is life after death and perhaps when we do pass on, we then keep a close eye on our loved ones. The place you then most feel their presence, is the place you are most at peace.

Saying all that it could just be that because I grew up knowing the Green Knowe stories, I am just making this all up in my head with an over-active imagination and when we die, that’s it, there is no coming back.

I heard many a ghost story from my Nan and Grandad and from Mrs Boston herself, concerning the house and garden. In the short time I worked there, I never saw anything but I most definitely felt that I was never alone. Was it just the wildlife or just my over active imagination? That is something I will never know. Like old houses, old gardens will always have stories of things that go bump in the night, the old Oak tree that they used to hang people on and that old lean to shed, that has plenty of big spiders and cobwebs….I think we all like a good ghost story.

Today I still work in a historical garden and often wonder about it’s past residents and perhaps, do they still visit? Have I walked in the same places as: Isaac Newton, King Henry VIII, Catherine Parr, A.A Milne, Lord Byron, Ludwig Wittgenstein, John Ray and many more. This I will always find fascinating, but the one thing that makes me the most proud, is that I can always say that I have followed and walked in my Grandads footsteps.