In Flanders fields the poppies blow
Between the crosses, row on row,
That mark our place; and in the sky
The larks, still bravely singing, fly
Scarce heard amid the guns below.

We are the Dead. Short days ago
We lived, felt dawn, saw sunset glow,
Loved and were loved, and now we lie
In Flanders fields.

Take up our quarrel with the foe:
To you from failing hands we throw
The torch; be yours to hold it high.
If ye break faith with us who die
We shall not sleep, though poppies grow
In Flanders fields.

A poem written by John McCrae, after a close friend was killed in the Flanders area of Belgium and buried in a grave marked with a plain wooden cross at the second Battle of Ypres in 1915.

John McCrae died of pnuemonia on the 28th January 1918 in Boulogne, France. He was a doctor, soldier, poet and artist.

Born in Droitwich, Worcestershire on the 28th August 1887, Arthur Footman (my Grandad, my Dad’s Dad) is my direct connection with the First World War. Joining the Bedford Territorial’s before the outbreak of the war, he became an Infantryman and then he went on to join the ‘Royal Horse Artillery‘. He fought in the Battle of Mons, the Battle of Marne, the second Battle of Ypres and was present at the first Battle of the Somme. Like many others in his time, he must have gone through hell many times, more times than any of us could of imagine. Yet through all the chaos, having known he had fought in the second battle of Ypres makes me wonder, had he known, met and or had fought along side John McCrae, this is a question I know, could never be answered.

My Grandad was very lucky to have survived the 1st World War and was then demobbed in 1919. Many of his accounts of the war, he told to my Dad later in his life. One of those accounts that he told my Dad is that, he was captured by the Germans, tattooed but then escaped on the same day. Being shelled and shot at day after day was bad enough, but being tattooed with a prisoner number, seemed to have angered him more than any of the other.

I have in other posts, mentioned the reasons why I wanted to do gardening and that I had followed my other Grandad’s footsteps, though I have never forgotten about the Grandad I never met. I have often wondered if there are any similarities in Grandad Footman and myself, the one thing I have found out, is that he used to love digging the trenches; now I know they are completely different scenarios, but there is quite a lot of digging in gardening.

For many in the First World War, they fought and died by the gun, but for a lot of people, it is the the Flanders Poppy that is a reminder to what had happened.

Flanders poppy seeds (Papaver rhoeas) can lie dormant in the soil for over 80 years before germinating, which is usually triggered by disturbance of the soil. During the First World War the battlefields were often churned up into a sea of mud, especially between the trench lines and in no man’s land and in the early part of the autumn Papaver rhoeas could be seen. Because of this the ‘Remembrance poppy’ is used in many countries as a reminder to those who had fought and died in this pointless war.

So for me, it is the flower that is greater than the gun….. 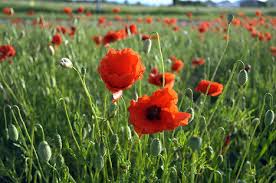